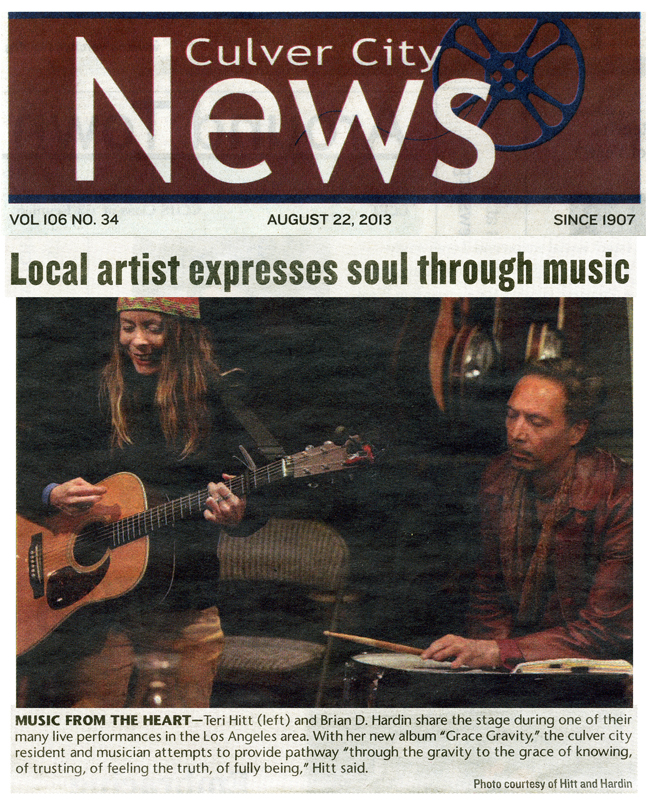 “I trust
that the music
will have the effect that it is supposed
to have.”

Hitt creates her art with hopes that it will help people reconnect with themselves, which can then lead them to becoming closer by establishing connections with other individuals.

“I believe that the true purpose of art and music in general is to give people a moment to go to and remind them of the spaces inside themselves so that one can remember who they are,” Hitt said. “You can trust the universe. We are so motivated by fear and to start turning that around in yourself you have to start looking at your fears and realize that they aren’t really that scary.”

Producer and drummer, Brian D. Hardin enjoys the fact that Hitt’s album was recorded live and in one take, a task that he acknowledges was only possible due to the committment and passion for the music that Hitt and the musicians on her CD shared for the project.

With musicians like: Brian D. Hardin, Chris Jacks, Vreny Van Elslande, Michael Dukes, Jeff Reiner, Stacy Cargal and Jim Whelan on guitar, June Kato on bass, Michael Fitzpatrick on the cello, Christopher Lopez on hammond B3, Hardin and Whelan on Keys, Chester C. Washington (Earth Wind and Fire) on Sax and Corrine Champigny on background vocals, Hitt was able to put together a CD with tracks like “War Against War” and “Immortals” that she hopes will elevate her audiences awareness of themselves and the world around them.

As an art form Hitt believes that music should do more than critique or point out social and global problems; rather, it should help people find solutions from within themselves and through dialogue with others. “It is one thing to say as an artist, “this is how I feel” but is it able to be translated by other people into their own language and internal symbolism?,” Hitt said. “If it does facilitate that, it would be great.”

With love and understanding Hitt hopes that her music can transcend the negativity that exists in the world in order to bring out the good in people. “I see that this is going on and I am not going to send negative energy to the people,” Hitt said. “I am going to have compassion for them. I will take it up a notch and send them good energy or as some people will say, pray for them or send them love.”