This song was inspired by the realization of the constant War that we have been in. It’s a crazy idea that a War against anything works.

We have to go beyond warring tendencies and
move towards peace and compassion in that way we will evolve and continue forward on our journey.

This is truly the only way that anything ever changes. We can go beyond the constraints on our consciousness that have been held in place by repetition by the media and government. We can evolve into the awesome connected beings we really are. We can use our power of intention to change experience.

There’s a lot more than meets the eye obviously. We can depend on our own feelings and experiences instead of parroting what is told to us. We are not limited, we are not confined.

We are the ones we’ve been waiting for.
The city is green beyond the walls … The Universe is unlocked. 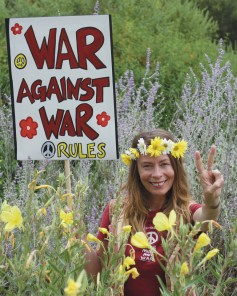 The only antiwar song to make our list was submitted by the band Grace Gravity. “War Against War” is a call to stop all fighting and turn instead to our compassionate natures. “We have to go beyond the constraints on our consciousness that have been put in place by the media and government,” says vocalist Teri Hitt.
Complaining may not be socially acceptable in these days of personal boundaries and manufactured enlightenment (unless it concerns cigarette smokers and taxes) but can anyone deny how much there is to bitch about? Our constitutional rights as Americans are eroding as quickly as our beaches, the middle class has all but vanished, habitable property sits vacant while the poor sleep in cars and under bridges (in the cities that will allow it) and yes, the rich are actually getting richer. We continue to sacrifice our kids for a war against a theoretical enemy. We ignore nuclear leaks and hunt Wikileaks. Infrastructures are disintegrating, yet construction jobs are scarce. We may be guaranteed the right to pursue happiness, but few have the time. We’ve traded sturdy cloth for paper; red, white and blue for green; stars and stripes for dollars and cents.
— Michel Cicero