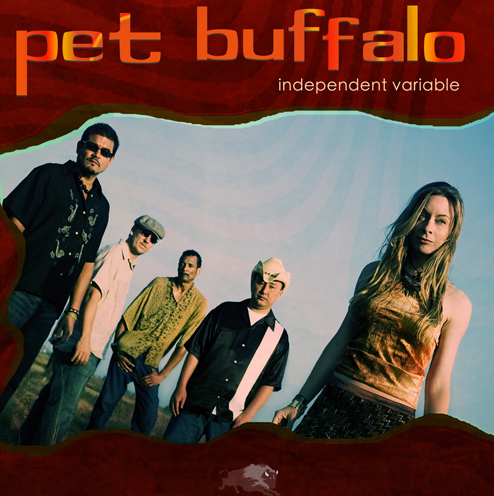 BUY $12 + Shipping
*Please contact me directly to order a copy of this CD.

Songs testifying to the values of peace, compassion, and self-discovery. Discovering true independence from the black and white viewpoint of the surface.

In 2003, Teri Hitt met Christopher Lopez at The Riviera Village Music Festival, they started playing music together and Pet Buffalo,  the band, came into being.

Most of the songs came out of dreams Teri had, awakenings to life on the macro/micro level, personal and impersonal. Christopher had several songs that Teri just happened to have lyrics that matched (funny how that works!).

Independent Variable refers to keeping your mind free and thinking for yourself. Truly people who are independent variables are the only ones that will make change in the world for the better. You have to remain true and whole unto yourself and stay awake in this crazy dream.

Don’t you wish you had your own Pet Buffalo? Well… probably not, but I do have something better; a band with that peculiar (eccentric) name, and the best part about it is they are high-grade.

Their new release Independent Variable is loaded with emotionally drenched bluesy rock and folk tracks. The lead singer, Teri Hitt, has a voice that dares you to listen and then listen again. She beckons you with her smooth vibrato and you begin to fall into the words. Once you are in the middle of it all there is no turning back. It’s the kind of album I would want to make.

The music presented here is a combination of rock, blues and folk. It all leans more towards an earthy blues rock feel, but the folk element remains a constant thread running through each track and it serves as a jumping off point into the different styles. In addition to singing, Hitt plays the acoustic guitar while Christopher Mark (piano, vocals), Aaron Stephen Chu (electric guitars), Dave Walker (bass), and Andrew Shreve (drums) fill out group. Chu plays some smokin’ licks while the keyboards of Mark complement his stinging leads. And what would all of this great music be without a solid rhythm section to move it all along? The rhythm is spot-on courtesy of Walker and Shreve (spelling is similar to the early Santana drummer).

It is important to lead off with an energetic track, and that is the case here as “Free Yourself” churns out and gets your heart pumping with a driving organ, guitars, and rhythm section. This, however, does not set the precedence for the pace of the album. At times stepping back and mellowing out to sound more Folk-Americana and then reverting to a more upbeat and heavier blues-rock tone is the way this band goes about their work, with moods shifting as each track progresses. The steaming track “Silence” starts with more of a downbeat feel, and then has a crankin’ break at about 2:50 when Chu gets the opportunity to strut his stuff. This becomes common ground throughout this release.

It’s all good from beginning to end, and for this listener Independent Variable rates as a satisfying album that is worth many listens.

Common NonSenSense
New Orleans/Gatwick UK/Austrailia
I particularly liked the blues feel of Expectation. It reminds me of the feel of 60’s and 70’s music like Linda Ronstadt and Bonnie Raitt. Teri has a strong voice that carries the melody easily with a feel that makes repeated listening a must. —Common NonSenSense
NRG 107FM Gatwick UK and Fringe radio in Sidney Austrailia.

Radio Free Moskow (UCLA)
“Boisterous, Bravado, Carefree, Druggy,Freewheeling, Fun, Light, Spacey, Spiritual, Trippy, Wistful, Yearning. I like these guys, and that they play a genre that’s not too heavily covered these days.”